Report out this morning was very good if you can live in a rearview mirror. It obviously is not forward looking given the global virus impact … but to throw some salt in the current administration’s wounds

Without a blockbuster 2020, job growth will be annually lower than the Obama years …

Heisenberg gets all the credit https://heisenbergreport.com/2020/03/06/jobs-report-blows-through-expectations-but-market-likely-to-view-numbers-as-stale/

Basically, things are the same month to 3 month avg.

These data visualizations bother me. Not sure exactly how to render tactically actionable, but strategically I have to consider more dire scenarios in my risk management strategies.

He closes with, quote: “As I stated above, the U.S. has been running MMT for the last three decades, and has resulted in social inequality, disappointment, frustration, and a rise in calls for increasing levels of socialism.

It is all just as you would expect from such a theory put into practice, and history is replete with countries that have attempted the same. Currently, the limits of profligate spending in Washington has not been reached, and the end of this particular debt story is yet to be written. But, it eventually will be.”

Heisenberg’s graph is an interesting but confusing visualization (the data, not his presentation)

I certainly agree w/ this point (my bold): “Perhaps more concerning is that it comes against record high confidence, record low unemployment and record high stocks. Something doesn’t add up there, and the problem is that the US economy is now leaning almost entirely on the consumer.”

When it comes to my investments, unknown variable mashups bug the crap out of me …. sigh

On what one uses to measure and report inflation …

CONSUMER PRICE INDEX – JANUARY 2020 The Consumer Price Index for All Urban Consumers (CPI-U) rose 0.1 percent in January on a seasonally adjusted basis, after rising 0.2 percent in December, the U.S. Bureau of Labor Statistics reported today. Over the last 12 months, the all items index increased 2.5 percent before seasonal adjustment. The index for shelter accounted for the largest part of the increase in the seasonally adjusted all items index, with the indexes for food and for medical care services also rising. These increases more than offset a decrease in the gasoline index, which fell 1.6 percent in January. The energy index declined 0.7 percent, and the major energy component indexes were mixed. The index for food rose 0.2 percent in January with the indexes for both food at home and food away from home increasing over the month. The index for all items less food and energy rose 0.2 percent in January after increasing 0.1 percent in December. Along with the indexes for shelter and medical care, the indexes for apparel, recreation, education, and airline fares all increased in January. The indexes for used cars and trucks, prescription drugs, motor vehicle insurance, and household furnishings and operations were among those to decline. The all items index increased 2.5 percent for the 12 months ending January, the largest 12-month increase since the period ending October 2018. The index for all items less food and energy rose 2.3 percent over the last 12 months, the same 12-month increase as reported in the previous 3 months. The food index rose 1.8 percent over the last 12 months, while the energy index increased 6.2 percent over that period.

Here’s the headline bullets from Reuters but posted by CNBC, quote:

Take your pick how you want to play … go figure.

Heisenberg posted today on those topics, while my humor makes light of the problem, this is both a very tough problem and a complicated set of information – not for the feint of heart or intellectually lazy 🙂

If you have yet to discern the power of US Fed so far … my question (to the conclusion) is how long will Fed be successful and what happens when not?

“Things get really – really – messy when you start to think a few steps ahead.

In the absence of a material upturn in ex-US economies (and/or a reinvigorated Phillips curve stateside), there may be no way out of the situation for the Fed. Indeed, anything they do could make things considerably worse.

If all of this already “smacked of inevitability” in Sparks’s original exposition of the problem, Kocic drives the point home emphatically. To wit:

What could happen if the Fed cuts rates in order to weaken the USD? A (temporarily) weaker dollar would imply a stronger EUR (or CNH), which would undermine the effects of foreign QE. As a consequence, the market would likely price in more severe (or extended) QE abroad, which would further compress their yields and create another demand for US assets and USD and, thus, offset the effects of the Fed action — we would be where we started. This would force another round of rate cuts in the US with repeated response abroad causing further rate cuts until US rates catch up with their counterparts abroad This is the troubling destination that poses the most severe long-term risk. If we reach the point of zero rates without being able to inspire growth (and some inflation along the way) either abroad or in the US, we would find ourselves in the disinflationary world with low growth and no policy tools to combat it.

Quote: “As Bloomberg’s Lisa Abramowicz reminds, Greece continues to have a junk rating from all three major rating agencies. The current U.S. 10-year Treasury yield is 1.62%.”

One can ask all kinds of questions about ‘why this is so ..?”. My favorite explanation is that US needs to keep rates artificial high to attract buyers given the HUGE treasury funding required due to irrational deficit. If there are no buyers for US Treasuries (and since China, Russia and others have materially reduced their purchases), then what happens to rates, what happens to Treasury’s ability to fund deficit? This is one big can of worms …

Here is another view of similar data analysis – basically stating that the treasury keeps selling debt, and only the big US bank dealers are buying and then they do not have the required liquidity, so the FED helps w/ repo infusions. Another really nasty can of worms until it all gets sorted out, but how? https://seekingalpha.com/article/4322761-repo-and-man-500-maybe-600-billion

Quote: “The residual not taken by foreign and non-financial sectors, $249 billion, got backstopped by the domestic financial sector. According to the Bank of International Settlements, that $249 billion in Treasuries went almost entirely to the largest four banks, presumably JPMorgan (JPM), Bank of America (BAC), Citi (C), and Well Fargo (WFC). They had been providing almost all the liquidity for the overnight system, and since Q4 2018, they have been very tight. Whenever they are tight, the whole system is, and the Fed needs to step in.

So that’s where we were at the end of September when this mess really got cooking. We won’t get Q4 numbers on all this until March 12, but the shifts in all this will be dramatic.”

Unless you’re on of those who think ever-increasing debt is positive for the economy, some of this data is worth thinking about … Quote: “Total household debt rose, up 1.4% Q/Q, marks the 22nd straight quarterly increase, according to the New York Fed’s Center for Microeconomic Data.

Non-housing debt balances rose by $79B in Q4, including a $16B increase in auto loans, $46B in credit card balances and $10B in student loans.

Debt transitioning to serous delinquency increased in the quarter to 2.36% of all debt balances vs. 2.27% in Q3.”

The next NIMBY battle: 5G small cells in neighborhoods

The not-in-my-backyard battles may soon have a new target: 5G small cells.

Where it stands: When it comes to 5G small cell acceptance, a PwC survey of 800 consumers suggests most people are willing to deal with unsightly 5G antennas, especially if they are in someone else’s backyard.

By the numbers: 86% said they will accept small cells that “blend into their surroundings.”

“It’s one thing to see the installation of the 5G boxes on poles on a main corridor that doesn’t offend people. But if you’re in a heavily residential area and you’re not expecting to see that type of thing, it’s almost like having a power transformer in your front yard. People are not going to like those.”

Still, consumers are excited about 5G — and willing to pay more for it — even though they don’t really know what it is, according to a recent Morning Consult poll of 5,600 adults in the U.S. and EU commissioned by IBM.

Between the lines: There has been a lot of hype about the promise of 5G, but consumers are still struggling with the specifics ahead of widespread rollout — and NIMBY backlash may slow down small cell construction in neighborhoods.

Quote: “Instead, gains in the homeownership rate came as a result of gains in total household formations. Total household formations rose by 1.3% in 2019 after recording 1.7% growth in 2018, which represented the strongest year for formations since 1985. Given the abnormally large 5-year cohort of 25-29 year-olds, we think that the household formation rate will see continued gradual increases over the next five years as this “mini-generation” enters prime first-time homebuying age. There are roughly 20 million more U.S. households at the end of 2019 as there were at the start of 2000.”

This guy is one of the better data watchers I read …

His conclusion, quote: “My base case over the past six months has been slowdown but no recession. Just as the long leading indicators told us to expect an economy that is on the cusp of a downturn, and maybe – but not probably – in one, the short leading indicators are confirming that now.

And so, true to my “just the facts, ma’am” approach, I am forecasting a continued slowdown to stall over the first half of this year that comes close to but misses turning into an actual recession. Consumer durable goods orders (and particularly vehicle purchases) and initial jobless claims are especially important to see if weakness spreads to consumers.“

This one chart and explanation made too much sense to me, so my risk indicator is demanding more information (Source) 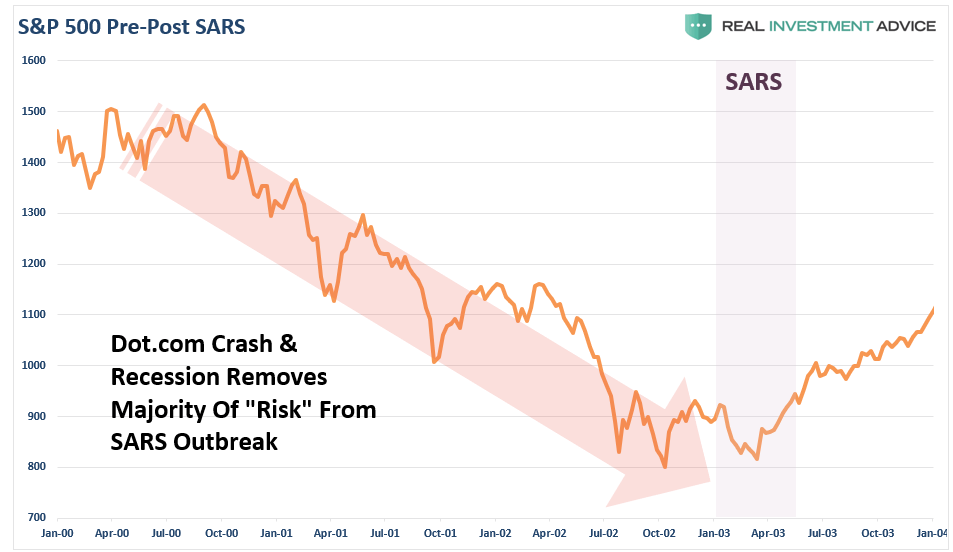 the words around it … quote: “Following a nearly 50% decline in asset prices, a mean-reversion in valuations, and an economic recession ending, the impact of the SARS virus was negligible given the bulk of the “risk” was already removed from asset prices and economic growth.

Today’s economic environment could not be more opposed.

Currently, asset prices are near historic highs along with investor sentiment and overall market optimism. The chart below is our composite “fear/greed” gauge, which is comprised of professional and retail asset allocations to equities. (Importantly, this is NOT a measure of how investors “feel” about the market, it is how they are allocated to it.)”

As much as I would like to really dive into buying the dip in Asian equities … I will wait until next week to see how mainland China reboots after their new year.

I love this table